Skip to content
We’ve all been reading articles, analysis, interviews talking about the challenges of Digital Transformation, on the fact that most companies fail in their journey: as a matter of fact, a McKinsey analysis in 2016 pointed that 70% of large scale transformation did not reach their goals (https://www.mckinsey.com/industries/retail/our-insights/the-how-of-transformation). 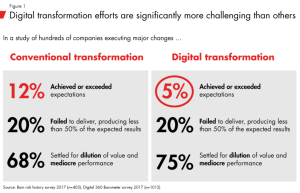 Consulting companies are offering their digital transformation frameworks in all possible flavors, companies are spending (hundreds of) millions USD in transformation programs hoping to see the sun after they will have reached the AWS or Azure clouds. And yet when I speak off the record with C-levels or operational team members in various industries, you seldom see people satisfied of  the path done and most companies still struggle to reach the level needed to stop fearing disruption.
Change management, Design thinking, new business model, Agile coaching, DevSecOps initiatives, microservices architecture, big data, machine learning and so on: in conferences, you hear consultants and solution providers describing all the miracles of these approaches and traditional companies sharing how good they have been at implementing these. Of course, in conferences you would rarely hear people who admit they are in the 70% of failure (or vice-versa, only the good 30% of the stories are selected for the conferences).
But as a matter of fact, all these topics which address Digital Transformation are huge and intertwined, so much so that I believe most organizations and individuals lose track in the complexity of all the things to be done. Coupled with constraints of compliance, legacy systems, investments limited by linear growth and resistance to change, I believe that many C-level and board members lose the big picture and understanding on how the different pieces of the puzzle fit together
I’ve been thus wondering for some time: if I was the CEO of a company which must go for its Digital Transformation to survive the coming years, what would be the ONE thing to start with and to focus on? Find scalable business models? Make the enterprise agile? Move out from the legacy systems? Innovate more? As everything seems necessary but resources are limited – your company probably does not have 20,000 software engineers like Google or 40,000 software engineers like Alibaba – and know how around digital is much less than in the big tech companies, this seems a real challenge to decide on the path to go, all the more than the CEO and the Group Executive Committee are not experts in digital either.
In a world of complexity and uncertainty, keeping things simple is the most difficult thing to do but probably also the most efficient. I am thinking that if I was to choose for the one thing to focus on in a digital transformation, this would be: OKRs across the company. OKRs stands for “Objectives and Key Results” and if applied efficiently and persistently across the board, I believe that it is the one thing that can help a company to succeed its transformation. But first, if you think that OKRs are the same as performance / annual objectives, then you are not doing OKRs. As a matter of fact, it is even advised no to link OKR to bonuses and variable components. The OKR approach was set up initially at Intel in the 1970s and then brought at a large scale and “open sourced” by Google, which is sharing tools and methods to anyone interested into following this approach. To see OKRs in action, “Measure what matters” by John Doerr takes us through a variety of companies which adopted OKRs. 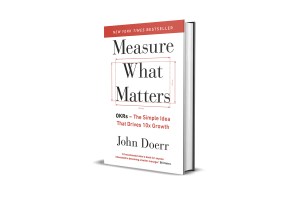 The reason why OKRs is my first choice? In big traditional companies, I think the number one factor impeding the company and setting it for failure when going for a major transformation is misalignment. Starting at the top level, where C-level executives are often not aligned naturally (objectives of the CFO may not be the same as of the COO, the CMO, the CIO…) or worse they may follow some personal agenda. Misalignment generally cascades down and as a consequence the drive and momentum on transformation fades away at the different levels of organization. On the contrary, I’ve had the chance to work in my career in companies where alignment was strong and we could see / feel the difference of a collective push in the same direction. When applied efficiently OKRs have this unique ability to align people’s efforts in the same direction, starting with the top, and give visibility and meaning to the work of everyone at his/her level. And as this rolls out, then priorities will appear naturally and split on efforts will appear logical to everyone on new business models, refactoring the legacy systems, making the enterprise agile and so forth.
What about you? What would you chose as the ONE thing to focus on if you were the CEO of a company going for a big digital transformation?